RSS
← Clinging to Hope
My Advice to New Teachers (and Old) → 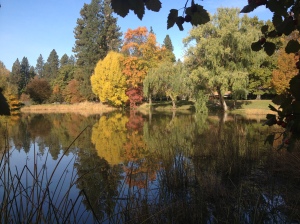 I love photos taken with mirror images in water.  I particularly like the ones I have to study closely to decipher which way is up.  I know that one half is real and the other is only a reflection of reality.  One thing I continue to learn is that perception of reality can be as convincing to many as reality itself – and that can be wonderful, beautiful – and also quite dangerous (or maybe humiliating – think Emperor’s New Clothes).

I see perception vs. reality come into play a lot in relationships.  One person is sure they have found their true love, but their love doesn’t share the same feelings, thus decimating the perception that true love was found – as true love would be reciprocal.  In broken relationships sometimes false perceptions destroy loving foundations built over many years.  I once knew of a person whose spouse accused them of cheating….. they were NOT cheating, but the spouse was so scared they were that it destroyed the relationship.  The perception of cheating was brought on by fear of losing the relationship and then that reality came as their spouse could not live with constant false accusations.

Perception vs. reality is a slippery slope.

To many, changing perception is threatening.

I also see this in community.  When communities are divided over an issue, some people will work very hard to hold on to their perception, often with manipulation and anger, because change feels threatening and scary…….  so is admitting that things could potentially be different and different, however terrifying as it seems, does not have to be bad.

Sometimes I am not great at practicing what I preach, but my hope is that I am always willing to challenge myself to understand perceptions other than my own.  If I am unwilling to do so, I cut myself off from truly connecting with the world I live in and the people who inhabit it.

← Clinging to Hope
My Advice to New Teachers (and Old) →